Free shipping for orders of minimum 40 Euros.  Check the special promotion on collections.

All our productions are available, either physically (vinyl or CDs) or digital only. Most of the booklets are now downloadable !

Go to the “shop” and use the SEARCH engine in order to find the recording or CD you are looking for.

The legend of Arion

Arion, a young musician and singer who was unequalled in his skill with the lyre, is said to have been born at Methymna on the island of Lesbos in the sixth century BCE. After a visit to Sicily to take part in contests against the finest singers and musicians – which he won and was showered with riches as his prize – he wished to return to Corinth and set sail on a Corinthian ship from Tarentum. Once out in the open sea, the sailors formed a plot to cast him overboard and take his wealth. When they attacked him he begged them as a last favour to let him play his lyre, in the hope of moving them to pity. But his efforts were to no avail and, realising that he would not obtain their mercy, Arion threw himself into the sea, where dolphins, who had been drawn to the ship by the enchanting music, bore him up as he sank and one of them carried him on its back and brought him to shore at Cape Taenarum.

Thus, Arion was saved by music, and the dolphin who saved Arion was placed among the constellations as Delphinus. 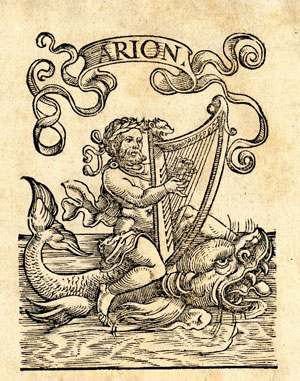